A Quick Chat with Pom Poko From Norway

The first official gig I made it to on Tallinn Music Week 2018 after the opening concert was the one played by Norwegian band Pom Poko. They captured me for the first time when I went to Vill Vill Vest in 2017, in Bergen, and I was ecstatic to see them in my hometown, hear people talk about them later and see the audience’s excitement grow as we were there early, taking in the stage at Telliskivi creative city. And was it creative indeed. These Norwegian artists were made to perform at the venue. It gave their free spirit enough room, enough atmosphere to take us away to the furthest parts of their minds, simply with the music, words, instruments and intense set of harmony it created. On top of seeing the fantastic performance I got to ask them a couple of questions that had been burdening – or rather bugging – my mind.

Firstly they said that in one word their music could be explained as “intense”. And that is so correct, so perfect. Nevertheless, it does not mean overwhelming in a sense of anxiety-inducing. It is intense as in you feel it with the every cell in your body. It reminds you why you love music. Asking what kind of music they don’t like, as the music festivals of that scale have a lot of different artists, they stated that they guess it is music that cynically exploits what’s most trendy at the moment. As their style is so much of their own, it makes sense to me.
Another part I really enjoy is expressions in Pom Poko’s album art. 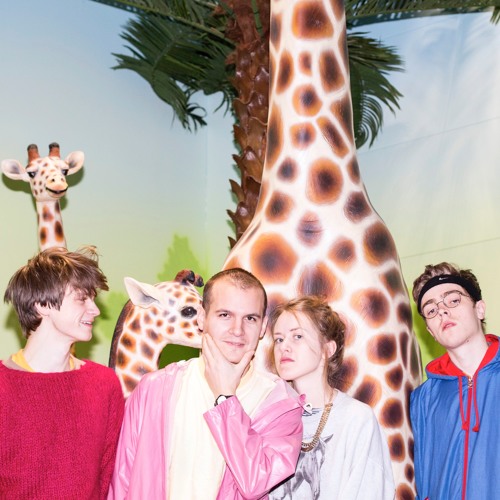 The art for songs and albums is very expressive. Do you have any favourite artists, both classical and more temporary, can you talk a litte about your album art(s)?
Erlend Peder Kvam makes our artwork, he’s one of our favourite artists and cartoonists that makes really crazy stuff. We like to work with people with loads of crazy ideas, so we can just give them a few guidelines and then let them go nuts with it. So he’s kind of made an ever-expanding universe of Pom Poko characters, and it gets crazier from now on. As for classical artists, we really like Hieronymus Bosch. We also wish to commemorate Isao Takahata, who made the movie we are named after, and whose movies always look stunning.

Continuing on a bit similar, a little poetic topic, I wanted to know what they would call their fans, and was given the best name for a possible fan club: “Riders of Poko“. In order not to make the whole interview too serious, I also wanted to know something lighthearted and make the artists feel – hopefully – better:

Tell us about your recent embarrassing moment or incident that is connected to a live performance.
– Our vocalist, Ragnhild, sometimes has trouble with the geography of the places we’re playing, so she has for example said “nice to be in Berlin, by the sea” and mixed up the names of two cities on tour. We just find it funny though, we don’t really get embarrassed easily.

And probably the most burning question in the locals’ mind: What was the expression Tallinn left on our guests?
– We have learnt that Estonian is  the world’s second smallest main language in a country, and that a lot of Estonian words are not just similar, but exactly identical to a lot of Norwegian words, both offensive and weird ones. Our first night was spent in the old town, which was very beautiful, medievalism was all around, even the wall in our apartment was seemingly a part of the old stone wall. TMW is a very nice way to get to play in Estonia for foreign artists, and it also seems like a nice meeting point for Estonian artists. We look forward to exploring the streets, buildings, people, food and music of Tallinn!

In general – if you ever have a chance to see Pom Poko live – go for it. You will become one of the Riders of Poko and you will see how genuinely sincere, motivating and beautiful their music is. A worthy discovery and even worthier start to my 2018 Tallinn Music Week experience. Also check their Facebook and SoundCloud!