Asgard is the land of gods. To arrive there, a rainbow bridge, Bifröst, should be passed. Asgard is composed of gold and silver palaces, home to gods, among which the most beautiful is Valhalla.

Valhalla is Odin’s place where he resides and watches over the skies and the earth, with his two ravens on his shoulders, Hugin and Munin, that wander around the whole world every day and inform Odin about what they see and hear. 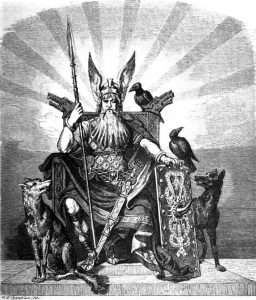 There are two wolves on Odin’s feet: Geri and Fleki. Odin gives them all the meat that lies before him because he does not need to eat. Mjöð, an ancient fermented milk drink, fulfills his hunger and thirst altogether.

Odin orders Norns (goddesses that control destiny) to find Runic alphabet and scratch the runes of destiny on a metal shield.

Odin is pronounced as Wōden in old English, from which the second day of the week, Wednesday, was derived (Woden’s day).

Odin is also often called Alföðr, “Allfather”, father of everything. A great majority understands that Allfather refers to Odin himself but there are also some who point out that Scandinavians believed an eternal unborn god superior to Odin.